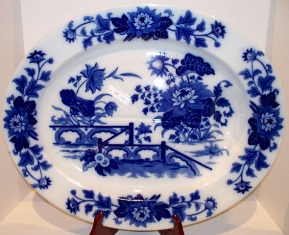 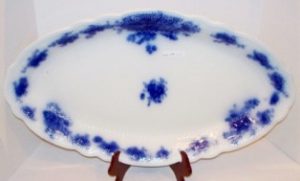 “Flow Blue” entered the English pottery world in response to highly valued Chinese Export porcelains.  The fanciful oriental landscapes and romantic themes created in deep cobalt blue caused quite a stir in Europe in the 17th and 18th centuries, which prompted English potters to imitate the designs and bring their own version to the marketplace.

Mr. Snyder continues on page 11, “Generally speaking, in the Early Victorian period oriental patterns based on imported Chinese porcelains and romanticized scenic patterns were the fashion.  Through the Middle Victorian period, floral patterns grew in popularity while Japanese motifs were introduced to the Western world.  By the Late Victorian period, Japanese and Art Nouveau designs proliferated.”

Collectors today might choose to focus on one time period for their collections.  Many opt for buying from any segment and mingling the old with the new, the scenic with the geometric, the lavish with the spare.

For more information we suggest reading:  What Was in a Set of Early Victorian Flow Blue? by Bonne & Bob Hohl and What Was Available (Late Victorian) by Bill VanBuskirk.