Keller & Guerin was a French family pottery that made flow blue, mulberry, and polychrome faience pieces in the nineteenth and early twentieth centuries. The history of the factory dates to 1728. In that year, Jacques Chambrette built his first factory in Luneville near the River Muse in the province of Lorraine. Chambrette began exporting his factory’s products to Italy, Poland, Germany, Switzerland, and the Netherlands. Since business was so successful and to escape the high taxation imposed by the king on wares from the Lorraine area, Chambrette in 1758 opened a second factory in Saint-Clement where he could escape the high tax rate. After the Luneville factory went bankrupt, Sebastien Keller bought it in 1786 from the Chambrette family. Then, around 1832, the son of Sebastien Keller along with his brother-in-law, Guerin, became owners. This alignment of Keller and Guerin resulted in the mark K&G. For 137 years the Keller family owned the company. 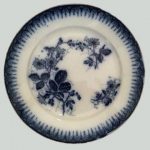 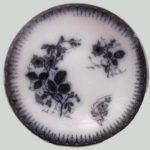 Like many French potters, Chambrette’s wares were faience manufactured. Faience is pronounced in two syllables with a “long a” on the accented first syllable and “ahns” on the second syllable. The term comes from the town of Faenza in Northern Italy.

The manufacturing process of faience had emerged in France during the sixteenth century. After unglazed earthenware was fired at a low temperature, it was then dipped in a lead glaze which resulted in a white, milky, opaque appearance due to the addition of tin of oxide. After the glaze dried, designs were painted on it. Many of these designs were inspired by the mementoes the French Jesuits brought back from their missionary work in China. Then the pottery was fired again, but at a high temperature.

In France the term “faience” was applied to decorative ware with flowers, insects, animals and exotic figures. Large faience lions and dogs were popular. French upper-class homes often had faience dogs in their hallways.

Faience ware became very popular in France because the king had prohibited the use of silver dinner services so he could use the revenue of these items to finance his wars. Faience was also made in Germany, Spain, and Scandinavia. In Italy the tin-glazed earthenware was called majolica. In the Netherlands and England, it was called delft.

Keller and Guerin brought industrialization to their faience factory in Luneville. The company was one of many in Luneville that became famous for their ceramics. They used transferware patterns as well as stenciled patterns. 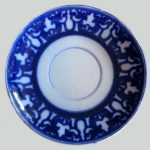 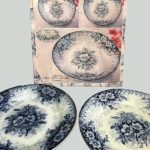 The transferware pattern, TIMOR, was used by Petrus Regout in the Netherlands c. 1875. Keller & Guerin began using this pattern c. 1891. 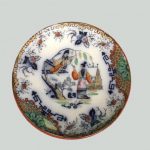 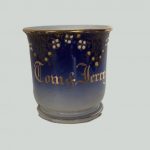 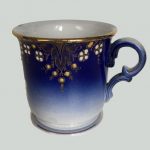