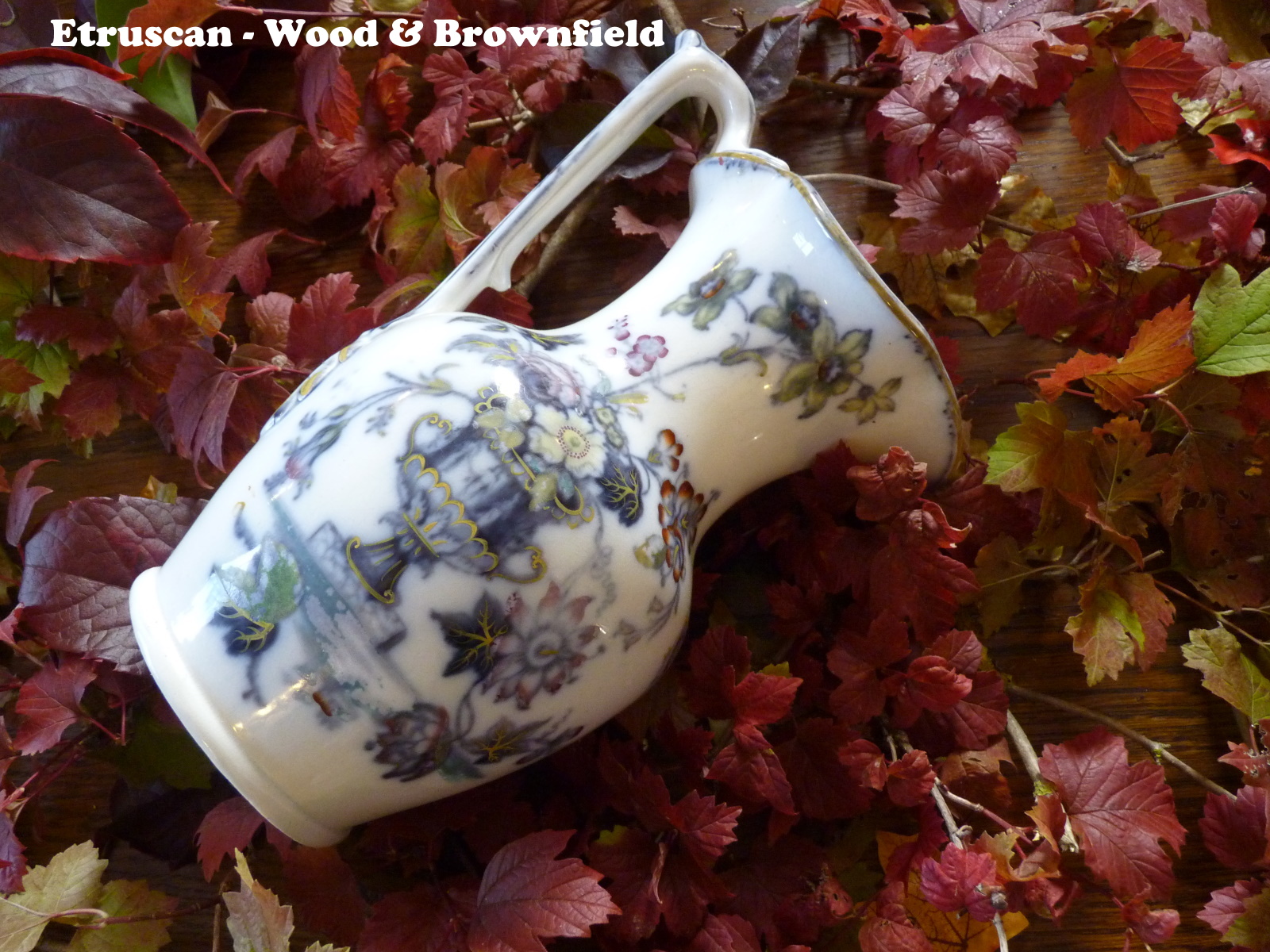 October is such a lovely month with Nature sharing her wonderful colours before the cold crisp days of winter.

So, with Autumn on our doorsteps and winter around the corner what better way to brighten the days than mixing the colours of autumn with a little Mulberry, don’t they look good together?

From the Lady of Mulberry, Ms Ellen Hill in her book “Mulberry Ironstone Flow Blues Best Kept Little Secret” I quote “Ironstone China made primarily in England between 1840 and 1870 transfer printed or hand painted in any of several colorations: dark greys, browns or purplish-blacks – the design can flow”

Hope you enjoy the 2 pieces I have chosen to go with the autumn leaves and maybe they will inspire you to look around and see what you can pair with nature’s pallet: –

Mulberry and Polychrome Jug by Wood & Brownfield in the Etruscan pattern dated around 1840 the polychrome although not very heavy add to the beauty.

Wood & Brownfield potters were a combination of William Brownfield, Noah Robinson and John Wood who formed a partnership in 1836. It is thought that strike action in 1836 delayed production until the New Year. At 25 William Brownfield was the junior partner. His career in pottery went from 1837 until his death in 1873. Brownfield Wares dates from 1837 – 1900 and covers a wide variety of items – Many examples of Ground colors can be found in plates and jugs that are widely collected. For more information, Tim H Peake’s book William Brownfield & Sons – An illustrated guide to Brownfield Wares 1837-1900 would be a good addition to any collection.

I checked the definitions of Etruscan “a member of an ancient people of central Italy whose civilization influenced the Romans who had suppressed them by about 200 BC” ?? But I can see the influence of the Urn on the pattern name – I think this is maybe known as the potter’s license to put their take on a name.

Mulberry with Gold Dessert Compotes by Minton impressed BB for Best Body which was used by the Minton factory the pattern is “Water Lilies” which as far as I can research is a given name and not a factory name there is the number 252 in gold on one piece this may have been the painter’s number. The date for the set will be around 1850.

My second choice is: –

1968 The Minton factory was taken over by Royal Doulton