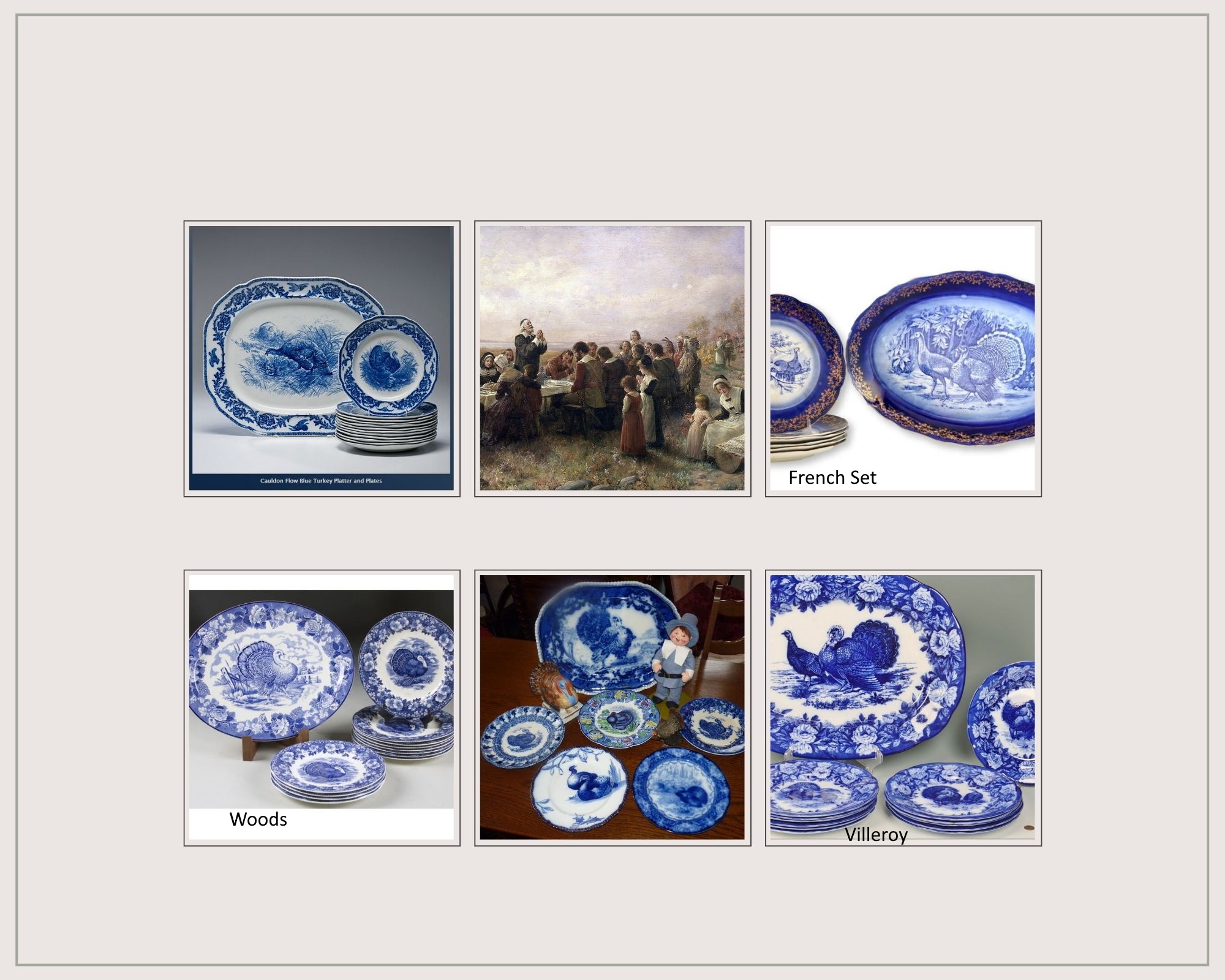 Turkey Platters, Plates and Sets come into their own when November brings “Thanks Giving” and December brings “Christmas”.

The history behind the Turkey patterns and the great platters goes back generations when it was traditional for a Large Turkey to grace the dining table for Thanks Giving, I am sure some of you have inherited pieces that go way back in your families while others are just starting the tradition of collecting and using them for their families to inherit giving them both memories and wonderful settings.

When “Thanksgiving” was made official in 1863 by Abraham Lincoln, English potters always looking for the next trend (they were very astute and knew their markets well) saw the opportunity to seize on the growing American market and produced turkey-themed dinner plates and platters for the occasion, made in many shades but especially in the beloved Flow Blue. Some of the more astute potters used existing border designs and just replaced the central pattern to fulfil the order books quickly, I have listed some of those potters later on.

It would seem that the sets consist of the Large Platters for that centre-of-table effect and matching Plates, I have yet to find or even see a Tureen or any other hollow ware that would match any of the sets.

There are so many Potters of these sets that it is hard to focus on just one, so the collage of photographs shows as many different ones as I could fit in.

You can look for many Potters that produced a variety of Tom Turkeys in different poses and styles.

Here is a list of the better-known potters that you can have fun hunting out and you don’t have to stay with just one design if you don’t want to, have fun mix and match, there are no rules: –

Cauldon tends to have one of the largest platters in its sets, a full 21 ½ inches by 18 ½ inches they produced two sets with the same central pattern but different borders, so you have Java and Scroll & Bird.

Wedgwood & Co. (Different from J. Wedgwood) produced their sets with the Clytie Border and a Turkey to the centre. They also used the same border and pattern name on some of their other patterns such as their Cattle Set.

Ridgways produced their set without a given name. The PID description states “The centre scene is highlighted by a large tom turkey standing on the ground. On the left background side beside a fence are farm animals, a duck, and a pig, standing under a tree without leaves. On the right background side is a house surrounded by trees. There are plants on both sides behind the turkey. The border design is typical of this firm. It is printed with large flowers joined by scrolls and sprigs to a heart-shaped and lobed design composed of scrolls”.

Doulton produced 3 sets using the same Turkey design on two sets, one set having the Watteau border and the other with Mistletoe and Holly around the rim.  The Platters on these 2 sets tend to be around 18 inches and the plates around 10 inches – The third set is un-named and different to the previous two, but here is the PID description of the border “Reserves and/or cartouches filled with scroll designs alternating with a single flower”.  On this set, the Platter seems to be more oval in shape.

Copeland produced their set with no pattern name but description courtesy of the PID “A white band around the outside edge. The border shows a flower in a circle design made up of scrolls. The centre scene shows a large turkey”. The platter is about 19 ½ inches by 15 inches.

Utzschneider/ Sarreguemines produced plates in Blue with polychrome and Copper Lustre which were named Dindon which is French for Turkey – very inspirational.

I found another French set without any pattern name but marked France as a backstamp in green.

Plates sizes vary from Wedgwood’s Clytie which are 9 inches across, Doulton plates tend to be 10 ½ inches across and Woods being 10 ¾ inches – so a variety of sizes can be found and in a variety of colours and shades.

Always stunning when used for a table setting or look wonderful on a wall display but take care when displaying as the platters are often very heavy, so please make sure they are nice and secure, quite hard to find as a full set but fun to hunt a set down piece by piece.

I hope you have enjoyed reading this month’s edition